In his will of 1726, John Sherborne of Bailey left instructions to find 'good almshouses on his estate at Stydd for five poor persons to live separately therein'. The building's most unusual staircase and first floor arcade have featured in many postcard views. Careful repairs over the years to this Grade II listed building have ensured that the houses continue to be useful as well as attractive. The four one bedroom flats are now owned by a housing association. 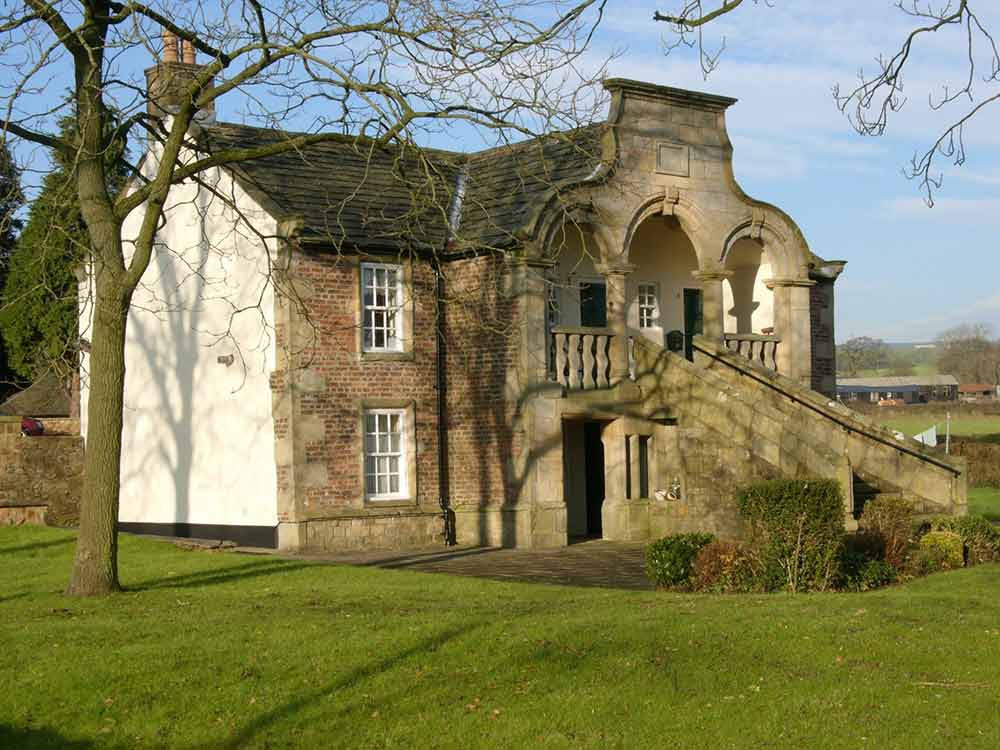 The bathhouse was built in about 100AD (CE) and continued to be used for about 200 years. It was built to serve the needs of the soldiers garrisoned in the nearby fort and later the local civilian population. However, it was built outside the walls of the fort because of the ever-present risk of fire from the furnaces used to heat the various rooms. For many people in Roman Britain a visit to the bathhouse was an integral part of their social life. Although long disused it is still possible to see the remains of the sudatorium (sweating room), the tepidarium (the warm room) and the caldarium (the hot room). The lines of flues can also be traced which give an insight into how the underfloor heating system was designed.

The Ribchester Museum of Roman Antiquities was opened in 1915 and remains the only museum in Lancashire dedicated to a collection of Roman artefacts. The original museum building comprised only one room, but through the 1960s to the 2000s has undergone expansion and redevelopment. In 2001 following receipt of significant funding, the museum replaced its permanent exhibition with a striking, informative and modern display.

Behind the scenes facilities were improved and issues such as access and education were addressed.

Although, strictly speaking, in the neighbouring settlement of Stydd (half a mile north east of the village of Ribchester) SS Peter & St. Paul's is an early barn church, built in 1789 and extended in 1877. The site was carefully chosen for at that time it was still illegal for Catholics to have public places of worship. The priest's house, Stydd Lodge, is presumed to have been the residence of the bailiff of the Stydd Estate for attached to the building is barns, shippon and a piggery.

The church is plain, but substantial. It was built to correspond in most detail with the barn on the other side of the lodge in order to disguise its function as a place of worship. It is the last of what are traditionally known as 'barn churches', others having been altered or pulled down. St. Peter & St. Paul's is the last such church in its original shape and form, and is in fact the oldest building in use at the present time as a church in the whole of the Salford Diocese, not the oldest parish by any means but the oldest church building. The church was considerably lengthened in 1877, its original size being no larger than that of the present sanctuary.

It stands picturesquely in a field at the end of Stydd Lane, leading off the road by the stone bridge near the Ribchester Arms. The lane also gives access to the Catholic Church of St Peter & Paul and of the Almshouses.

Over the centuries this small chapel has been altered many times. The earliest part of the building is in the north wall which is a good example of transitional Norman work. If the existence of a Norman church is conjecture, there is no doubt that a church was built around this time at Stydd. The history of the small chapel is also obscure. Whether it was built as a hospice for the religious order of the Knights Hospitallers, or whether it began its history as the domestic chapel of the Lord of the Manor of Stydd is not clear. But from contemporary deeds it is known that the manor was in the possession of the Knights Hospitallers during the middle of the 13th century.

Although there is no mention of a parish church in Ribchester in the Domesday Book evidence exists of a church on this site in the sixth century.

St Wilfrid's is dedicated to one of the great churchmen of Saxon times. Wilfrid was Bishop of Ripon and Archbishop of York and as Bishop of Ripon was granted lands adjoining the Ribble in the hundreds of Amounderness, in which Ribchester was situated. It is possible that he visited the township and converted the small Celtic Church into one of a more durable and magnificent structure.

The nave of the present building was founded in the 12th Century and the north, or Dutton chapel, completed in the 14th Century. The buttressed tower with its embattled parapet was erected at the end of the 15th century.

St Wilfrid's is a Church of England Primary School, built in 1959 and has been expanded over the year to serve the residents of the village and surrounding area. It is a small school, catering very much for the local community. All the children know one another. The older ones look out for the younger ones, and there is a caring feel to the school. The School is supported by an active and hardworking PTFA, which organises events and raises funds for the School.

The inn, which dates to 1707, is a Grade II listed building, once used as a courthouse, has some unique external features, being well-known for its Roman pillared portico. It stands on Church Street at the Y junction where the Roman branch road heads off up Water Street and Stoneygate Lane to join the main route from Chester to Hadrian's wall. This ancient junction is the ancient centre of the village and the open space in front of the inn is known as the Hillock (currently used as the pub car park). Although giving the impression of a former market cross, no evidence exists of this being part of its history.

Over the years several alterations have been carried out to the building, including the opening up of a refreshment room to cater for the large number of visitors. By the middle of the 1940s the doorway to the right of the main entrance had been blocked up to be replaced by a central doorway to the refreshment rooms which remains to this day.