Ribchester's new War Memorial on GreensideOn 22 April 2013 a group of villagers met to discuss the possibility of erecting a village war memorial in 2014 to commemorate the centenary of the start of World War 1. The foundation of a War Memorial Association with the election of a management committee and charity registration followed.

A number of sites across the village were considered before agreement was reached on a site on land to the rear of the Greenside car park. The land is held on long lease in agreement with the Borough and Parish Councils.

The design chosen for the new memorial was of a four sided stone obelisk, approximately 7 feet high with a low angled pyramid on top of the column. The obelisk would stand on two plinths on a stone paved square.

It is to the great credit of the association that, despite the difficulties encountered, not least the need for significant fund raising, the memorial was completed in time to be opened by Sir Peter Openshaw on 'Remembrance Sunday' 2014 and dedicated by Rev'd Gill Henwood of St Wilfrid's and Fr David Chinnery of SS Peter & Paul's.

The Memorial commemorates 23 residents of Ribchester, Knowle Green and Dutton who gave their lives during the two World Wars. 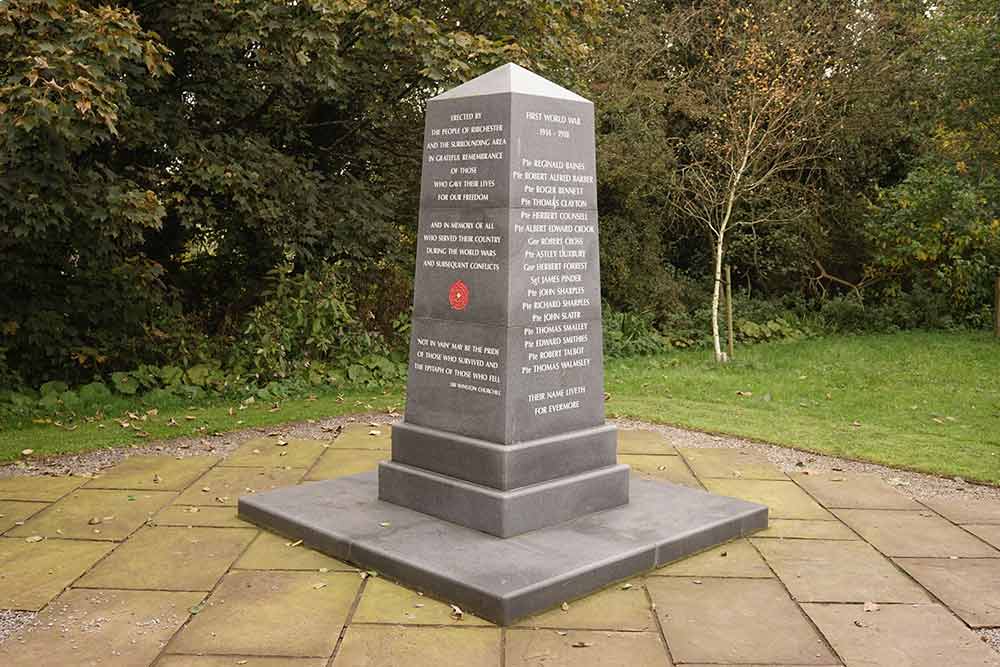 What began as a local European war conflict between Austro-Hungary and Serbia on 28 July 1914 was quickly transformed into a general European struggle by Germany's declaration of war on Russia on 1st August 1914. This quickly led to the general mobilisation of troops by France (1st August) and Britain (4th August) and eventually to a global war involving 32 nations. 28 of these, known as the Allies (including Britain, France, Russia, Italy and the USA) opposed the coalition known as the Central Powers (Germany, Austro-Hungary, Turkey and Bulgaria).

The immediate cause of the war between Austro-Hungary and Serbia was the assassination of Archduke Franz Ferdinand at Sarajevo in Bosnia. However, the fundamental causes of the conflict were rooted deeply in European history of the previous century, particularly in the political and economic policies that prevailed on the continent after 1871, the year that marked the emergence of Germany as a great world power.

The war continued for four long years until the signing of the armistice on 11th November 1918. By then the total casualties among the various armies had reached staggering proportions, amounting to over 37 million. To this figure must also be added almost 10 million civilian deaths caused indirectly by the war.

For Britain and its Empire, the cost was enormous. In the four years of the conflict some 8.9 million men had been mobilised, often the brightest and the best of its available manpower. By November 1918, some 35.8% of these had become casualties with 908.000 killed in action or dead because of wounds received or of sickness brought on by terrible conditions encountered on the various battlefields.

Despite world wide hopes that the settlements arrived at after the war would restore peace on a permanent basis, World War 1 actually provided the basis for an even more devastating conflict that would follow, some 20 years later.

Formed around the site of a great German pillbox with the Cross of Sacrifice built on top of the structure.

At 45 metres high, Thiepval is the largest memorial built by the War Graves Commission. It stands on a ridge just south of Thiepval village and commemorates more than 72,000 men who died in the Somme sector to 23rd March 1918, over 90% of them during the period from January 1916 to March 1918. Designed by Sir Edward Lutyens the memorial was dedicated by the Prince of Wales in 1932 since when it has received countless visitors. Hundreds still attend the ceremony, held every three years on 1st July, to remember the thousands of lives claimed by the battle of the Somme in 1916.

World War II was a global military conflict that in terms of lives lost and material destruction was the most devastating war in history. It began in 1939 as a European conflict between Germany and an Anglo/French/Polish coalition but eventually widened to include most of the nations of the world. It ended in 1945 leaving a new world order of superpowers dominated by America and Russia. More than any previous war, it involved the commitment of a nation's entire human and economic resource, blurring the distinction between combatant and non-combatant and the expansion of the battlefield to include all of the enemy's territory.

The signing of the treaty in the splendour of the Chateau of Versailles that formally ended World War I was aimed at preventing Germany from ever again disturbing the peace of Europe. Yet the very harshness of its terms would give Germany, and Chancellor Hitler an excuse to prepare for war, and bear out the awful truth of Marshal Foch's verdict of the treaty: "This is not peace, but an armistice for twenty years".

World War II proved to be the bloodiest and most costly in history. Between 1939 and 1945, millions of troops and civilians were killed or injured, vast areas laid waste and once proud cities reduced to smoking rubble. It was fought as total war, transforming the face of the world in many unforeseen ways. It was indeed the defining conflict of the 20th century.

Britain again bore a heavy cost although not as great as in World War I. During the conflict, some 5.9 million men and women were mobilised. 733,000 of these (some 12.4% of the total) became casualties, with 260,000 dead or missing.

James Harrison: 88th Field Regiment, Royal Artillery
Resided Goodshawe Farm, Dutton. Served with BEF in France and evacuated in 1940 via Dunkirk. Posted to Singapore and taken prisoner by Japanese army February 1942. Worked on the infamous Burma railway and the bridge on the River Kwai. Succumbed to ill treatment on 8/10/42. Remembered at Kanchanburi War cemetery.

Edward Walter Fletcher: Flight Sergeant [Bomb Aimer] 153 Squadron RAFVR
Resided Bank Top, Dutton. Killed with other crew members when their Lancaster aircraft crashed following a raid on Stuttgart during night of 28th/29th December 1945 on what would have been the final sortie of his first tour of duty.

William Simpson Dickinson: Stores Asst Royal Navy
Killed at Bari Harbour, Italy 9/4/45 when, during a German air raid, his ship, HMS Fabius, was hit by a bomb. The ship which was carrying a large quantity of ammunition suffered a catastrophic explosion.

Extracts from 'Debt of Honour' by kind permission of Roy Skilbeck.